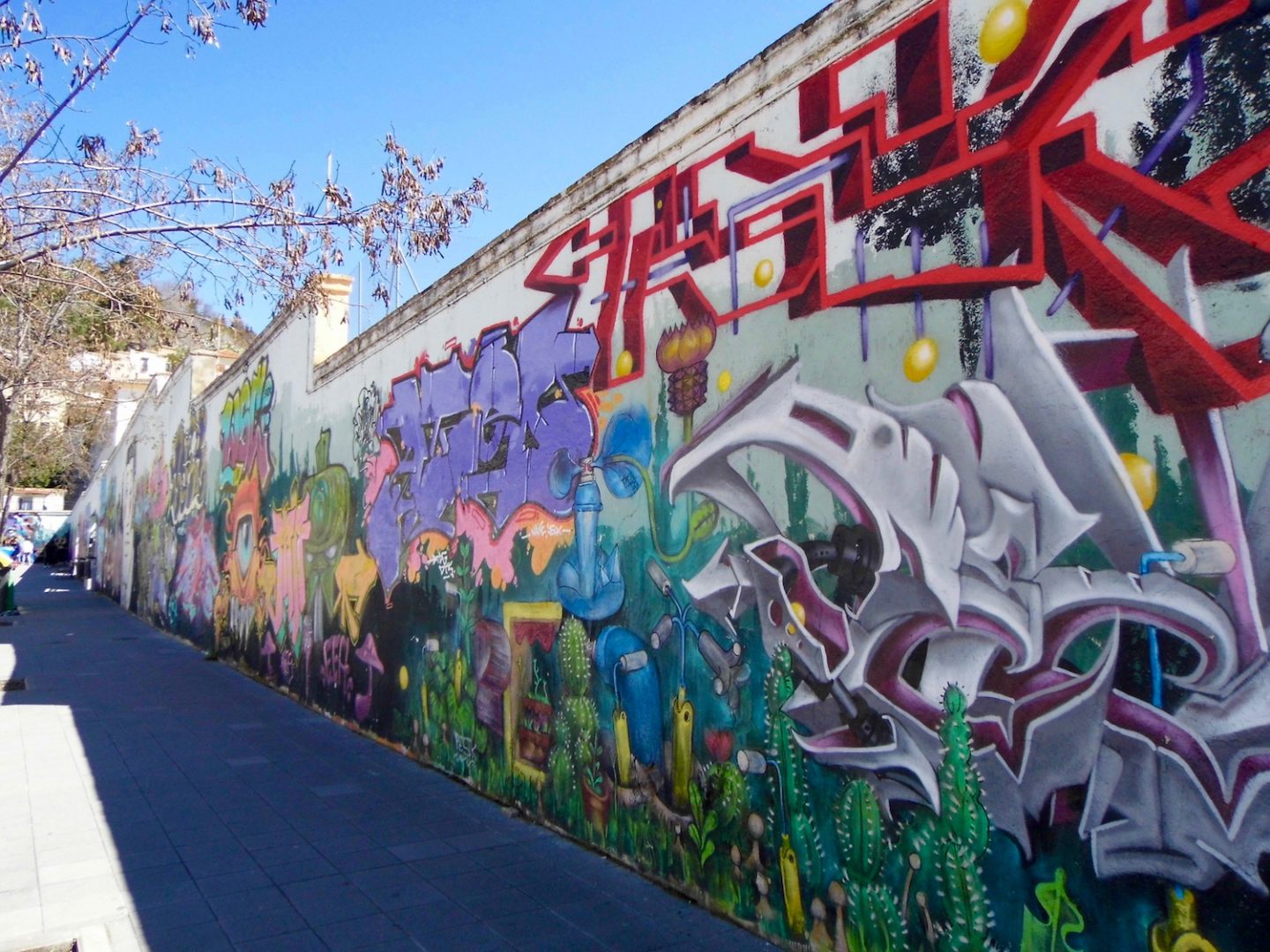 No way could we miss Granada, a two-hour bus ride from La Herradura where we were visiting family for the week.

The journey by bus went through beautiful rocky terrain, little villages picking up commuters and an impressive arched bridge. As we approached we saw snow-topped mountains and the Alhambra perched above the city. It’s no word of a lie to say Granada now makes it onto my list of favourite cities along with San Francisco and Fukuoka.

Prepare for a photofest. 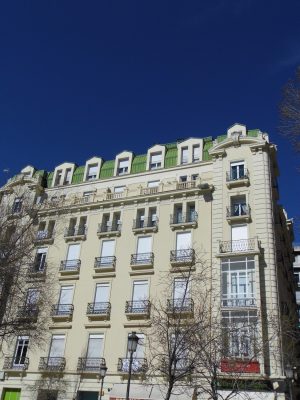 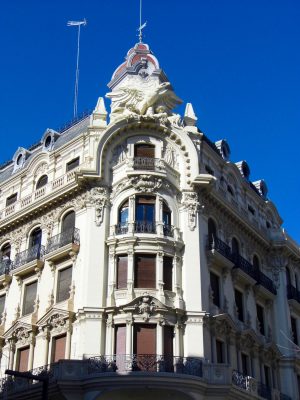 Just look at that sky!

From being dropped at the bus stop at the edge of town it was a straight road into the heart of the city. We arrived on the bluest of spring days, which set the city’s buildings off wonderfully.

We had no plans apart from one and were in stoatin’ about town mode. For me it’s the best way to see somewhere new. No guide book, but comfy shoes and plenty of cafes/watering holes to see us on our way.

Detail galore on these buildings. I didn’t catch their names, they were simply grand facades encountered on the walk into town. In addition, our route into town took us through lots of narrow, residential streets. 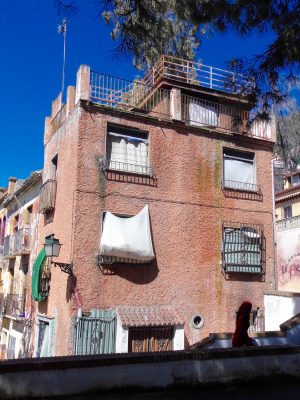 We stopped of at Las Ramblas for coffee in the sun and consulted ye trusty Google Maps. Next stop Plaza Joe Strummer which Stephen was keen to find (hence the t-shirt). We didn’t know what to expect really, but were pleasantly surprised as it’s a shady little spot. The street sign was missing and I’m guessing it needs replacing often.

We both love The Clash. And when I first saw Stephen had a photo of them as a cover pic on Facebook, I knew he’d be cool. Hmmm, I’ll give him a chance, I thought. 😉 Granada gets a mention in my favourite Clash song, Spanish Bombs. So it was a great idea to give Joe a little square.

Here’s Stephen by the missing plaque (I promise he didn’t stash it under his t-shirt!) plus a view from opposite the square. I hope I managed to capture the lady in her colourful orange hijab in this. A lovely part of a lovely city. Joe would no doubt be pleased that a stone’s throw from his own little corner of Granada there is some dynamic street art. A big wow factor seeing it against that bright blue. I’ve developed a high regard for street art since the Yard Works festival at SW3 in Glasgow.

Granada has no shortage of illuminated walls. As an artist it makes me happy to see art becoming accessible to everyone and part of the cityscape. 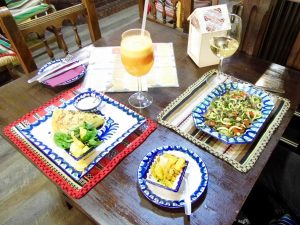 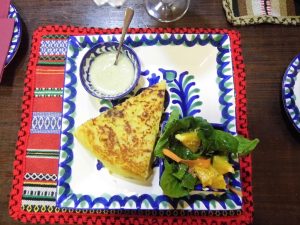 After coffees on Las Ramblas followed by the art, we went in search of El Piano, a vegan/vegetarian slice of heaven here in Granada. I highly recommend this colourful little spot. I do love to eat in a beautiful atmosphere with gorgeous art or landscape around me.

I’ve added a link to their Facebook page and I do hope it’s still there in case you’re looking for it (or we are next time!). I asked for something typically Spanish, hence the omelette and salad. Stephen, meanwhile, was impressed with his pasta dish. So much so he still describes it as one of his favourite meals ever. Could my carnivorous other half be changing sides?

It wasn’t our last stop for food that day. And what impresses me about many eateries in Spain are the tapas dishes the servers present you while you’re deciding.

COULD WE LIVE IN GRANADA? 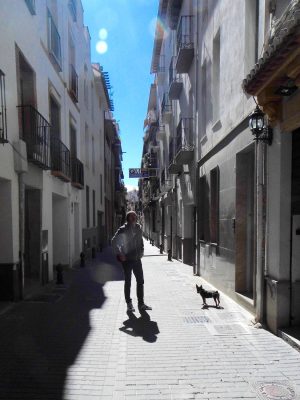 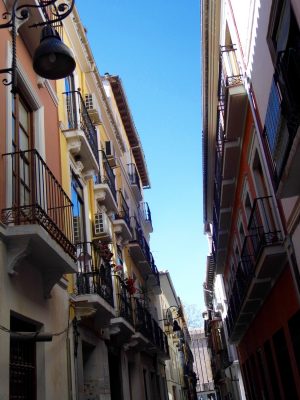 Seriously though, it ticks all our boxes. An urban jewel with a blend of traditional and modern. The convenience of being in a city, yet small enough to get around on foot. Well-connected to other big towns, while close to the coast and countryside.

We’ll be flying in on a DC10 tonight!

Alas, this was not to be. And I mention the Alhambra simply to say plan ahead. It seems impossible to come here on a spur of the moment ticket, even in a relatively off-season time as it was when we visited.

We did, however, manage to get fairly close to the grounds. Furthermore, a visit here would warrant a good couple of days here in Granada to take in all the other sights of the city.

Looks like we’ll just have to go back again. 🙂 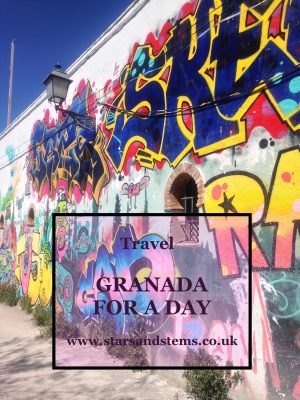 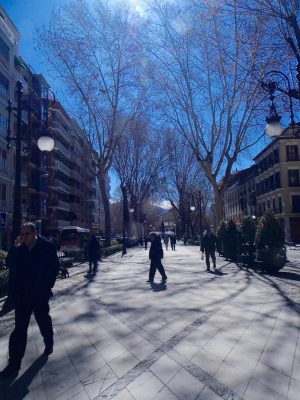 Have you been to Granada or the Alhambra? Drop me a comment below and tell me.