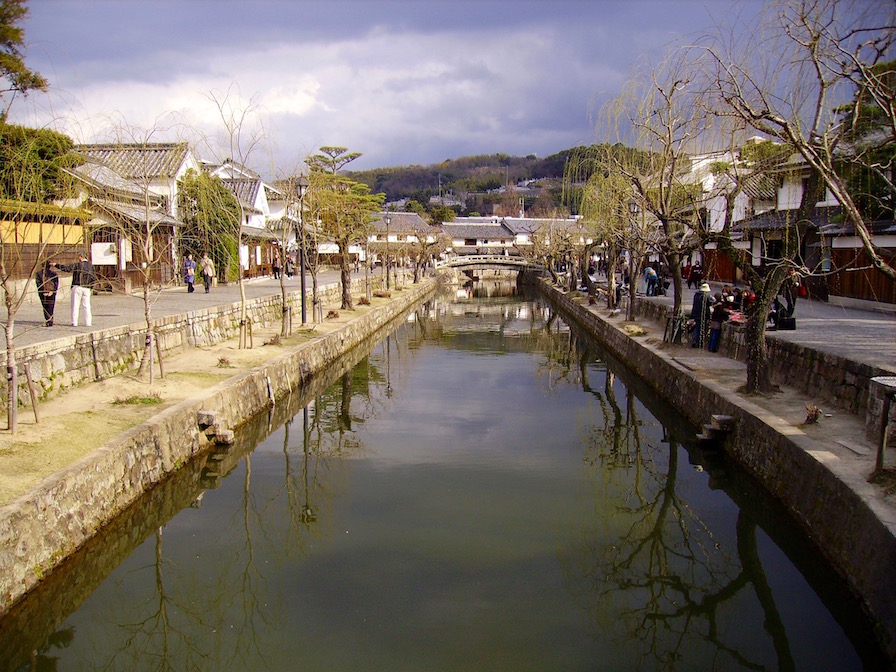 Kurashiki – what a wonderful little town! And a place that I discovered by accident.

Around this time of year I get a little homesick for Japan, namely because we’re approaching cherry blossom season, which I love to high heaven and back. Well in actual fact, the sakura season is in full throttle, but it’s yet to make landfall in Glasgow.

I visited Kurashiki in March 2007 – I can hardly believe that it was eleven years ago! And in fact I sometimes take a moment to recall that I lived in Japan at all. But indeed I did. And this was one of the many unexpected gems that I unearthed.

WHY I VISITED KURASHIKI Art, specifically glass art, brought me to the charming town of Kurashiki in Okayama prefecture, roughly halfway between Kobe and Hiroshima. After I’d been living in Japan for a couple of months I felt brave enough to go on some solo visits. This was a port of call because I saw a flyer advertising a display of stained glass. Since everything was in Japanese, I asked a student what it meant. She kindly organised a whole day out for me, researching train and bus times and prices as well as drawing a map from the station. I arrived not to see authentic glass panels with Japanese designs painted on them, but these translucent abstracts in the windows of a large civic building.

I loved them! They lit the space up and reminded me of workshops back home where we create children’s stained glass. And I loved them all the more for the fact that I hadn’t expected them and that I’d already been on such an adventure to see them.

I don’t think that they were children’s art. But I’m a bit ashamed to say that I don’t know who created them. Were they by an individual artist or were they created in an art class? They will remain a beautiful, abstract mystery. And where did I see them? The flyer with the information is long gone, but I have an inkling that they were here at the Kurashiki City Art Museum judging by the steps I’ve retraced on Google Maps.

THINGS TO SEE IN KURASHIKI For me, one of the pleasures of exploring a new country is simply “stoatin’ about” as we say in Glasgow. In other words, wandering without any particular plans. Once I’d seen the window art I was at a loose end, with five more hours before my coach trip back to Takatsuki. With no plans made, I spotted the words Ohara Museum of Art and Bikan Historical Quarter on my map. It turned out all I needed to do was cross a busy road to be in Olde Japan.

The Ohara houses a huge collection of western art and was the first to do so in Japan. Given how Japanese art exploded onto the European and American scenes post-Sakoku, it’s interesting to see how Japan viewed our art in return. No photos allowed in the museum itself, but I did take some outside in the grounds before wandering off to see the old town.

Like all modern Japanese towns and cities, Kurashiki has nests of cables in the air which aren’t pretty, plus noise and neon. But there are none in the authentic old town which features canals lined with willow trees, beautiful stonework and museums. I particularly liked the architecture of the old storehouses which give the city its name.

Although it’s busier nowadays according to this article from 2011, it was a relaxed late-winter day for me. Even so, it sounds as if the town still holds its charm and is a pleasure to stroll around seeing authentic shops, restaurants and lanes. And not a vending machine in sight!

THINGS TO SKETCH IN KURASHIKI 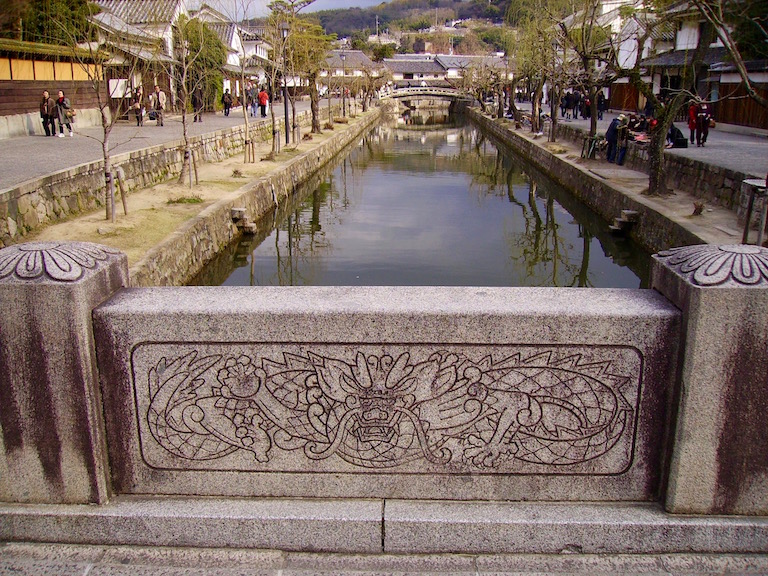 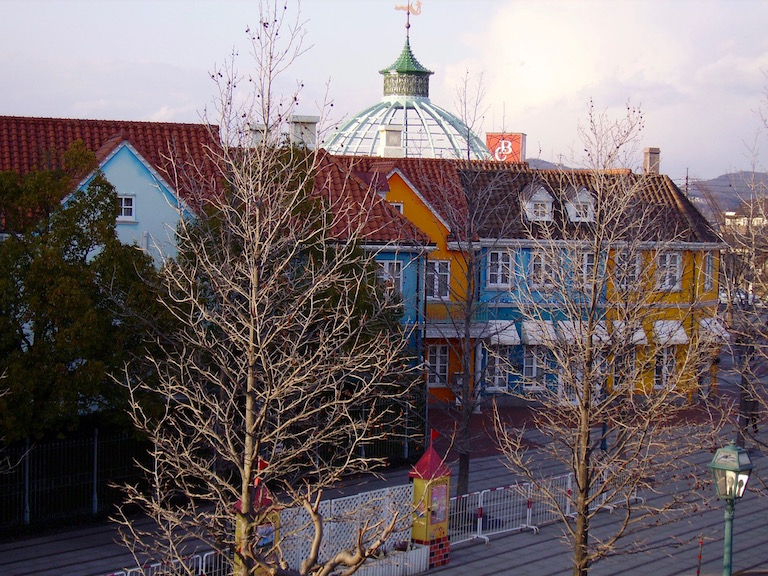 There’s plenty of sketchbook fodder in this delightful town. Here are a couple of things that I sat down and sketched. How can anyone resist a bright red house? This is in the grounds of the Ohara Museum and I’m thinking of making an offer (;) ). I do wish I’d asked someone in my rubbish Japanese a bit about it, since I don’t think it would’ve been a home. And this wonderful scene of the canal and the stonework. A couple of weeks later and this scene would’ve been fringed with cherry blossom.

Alas, I didn’t bring back the sketchbook with these drawings. Many of my artworks stayed in Japan and are still there – but I’m daft not to have squeezed in my sketchbook. All the more reason to head back over and draw some more!

One place I didn’t sketch – and nor will you because according to Wikipedia it’s no longer there – is this version of Copenhagen’s Tivoli Gardens. It closed due to debt apparently and was short-lived as it was. Personally I’d sooner see the real thing in Denmark – plus Japan has plenty of its own wonders to offer.

Mind you, could there be a mini-Glasgow somewhere in the Land of the Rising Sun?

HOW TO GET TO KURASHIKI Obviously the best way to stop here is to hop on and off the shinkansen (bullet train) with your Japan Pass which I highly recommend for anyone visiting Japan (there will be a post!). Kurashiki’s nearest big neighbour is Okayama (which is also the stop for visits of Naoshima the art island if you’re asking – I’ll be back to link up once I write a post about there).

For me though it was a trip to the bus station with my student, followed by a four-hour, bum-numbing coach trip. The bullet train is very expensive which is why I recommend buying a pass. Which is an option I didn’t have on my working visa.

That said, it did turn out to be an interesting way to see more of the country as we sped through flat green farmland, the mountainous interior of the country visible in the background. But I’d still choose the shinkansen!

WHERE TO EAT AND STAY IN KURASHIKI Alas I was only on a day trip, which is a shame because there’s still plenty to see in the town. If I’d had more time (and money!) I’d have booked a ryokan overnight, an experience in itself, plus taken a wander around the Tsurugatayama park. Yama means mountain, so it’s a fair guess that that’s what you’re looking towards in the top photo.

Food-wise, I was still taking little baby steps when it came to tracking down vegetarian food. But I was pretty famished when I stumbled across this pretty little place in the mall. Far too long ago to remember where it was, or if it even still exists. But the gentleman working there went out of his way to prepare me something to eat, even googling “vegetarian food” to make sure I didn’t leave hungry. Therefore his cafe deserves a place on this post.

MORE OFF THE BEATEN TRACK JAPAN For a great blog with informative tips and gorgeous photos hop over to one of my favourite blogs by travel writer Donny Kimball. And read about his quest to discover the undiscovered Japan.

Have you ever been to any unexpected places on your travels? Leave me a comment below.