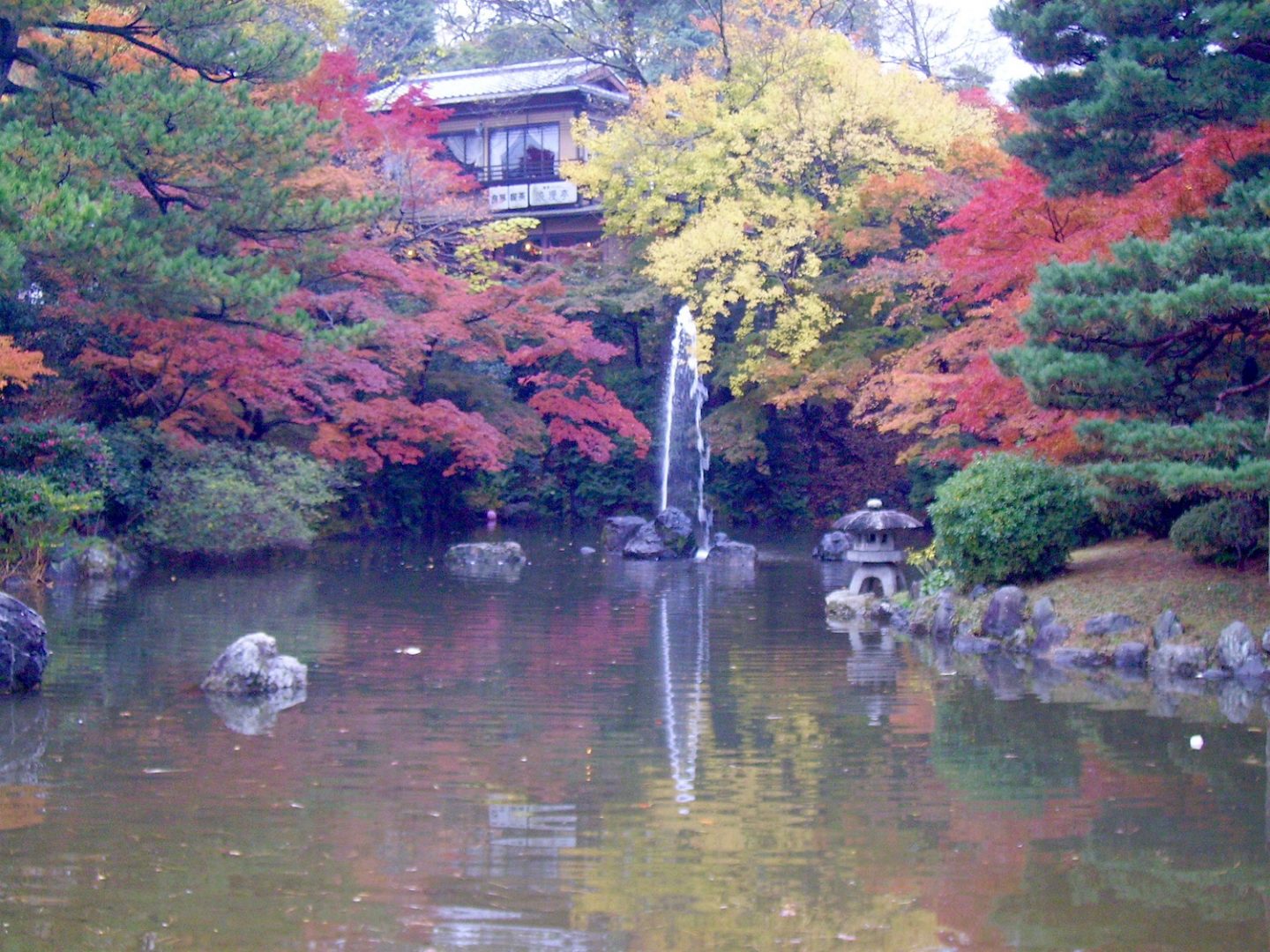 It’s hard to believe a whole decade and a bit ago I was enjoying autumn in Japan. In fact, those were my first few weeks living out there. I went to Osaka in November 2006 to teach English for a year, but that’s a story for another time.

The company I worked for offered me a job in a great part of Japan, right in the heart of the Kansai region. My town Takatsuki was halfway between Osaka and Kyoto, very well-connected and roughly thirty minutes to each city if you caught the slower train. I took these photos on my first time out and about as I wandered around Gion in Kyoto, the old part of Japan’s former capital. And a must for temple fans. I was very happy to arrive when nature was putting on a show. Autumn was in full swing and the leaf-viewing underway. Being a cool weather chick, I was relieved to have missed both the month-long rainy season and a whole season of sweaty humidity to begin with. This part of Japan is much further south than most of the UK, so mild in cooler months. My memories are of crisp, sunny days and nights that came quickly.

Japanese people are autumn-mad and flock to local parks and countryside when the first leaves turn. As I strolled around the park in Gion, I felt quite proud of myself. It was a childhood dream come true and I was finally here. And this was my first day in the wild without Japanese co-workers or students, communicating with REAL Japanese people. Furthermore, I even got to try out my fledgling command of Japanese (only to find out the man I spoke to was American!). 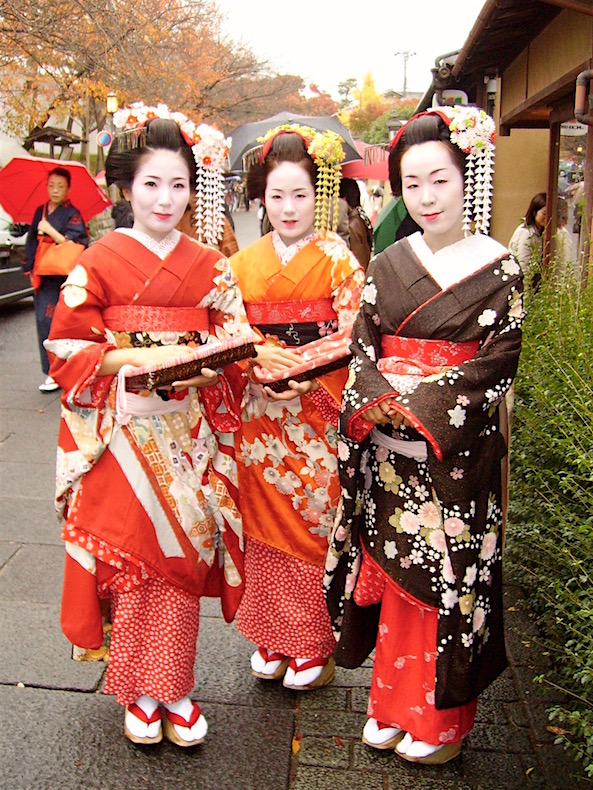 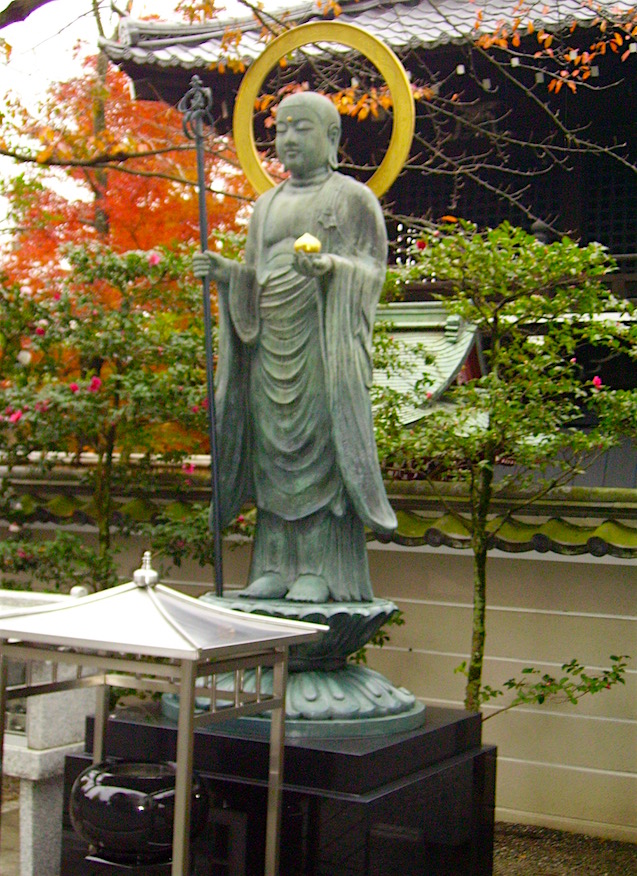 …and they have four seasons which they’re really rather proud of. That may seem a rather obvious thing to say, but not everywhere in the world has such well-defined seasonal shifts.

Japanese people love to view trees and welcome the cherry blossom appearing and leaves changing colour. And it’s rather life-affirming to see people doing that. I certainly appreciate our seasons back in the UK. Autumn – or fall – is called aka in Japanese. It’s the same word as red, plus the kanji (character) also contains the character for it (no doubt named that way because of the leaves).

Kyoto is the old capital and home to stunning temples as blogger Cultured Black Pearl writes. Gion is the traditional area of Kyoto that tourists flock to, home to tea houses, interesting shops, wooden houses and maiko (Kyoto-speak for geisha). I took these photos in Maruyama Park, perfect for experiencing autumn in Japan.

Because Gion is so popular with tourists, it’s very well sign-posted in English. My favourite sign pointed out that regardless of their social status, anyone who drops litter will be prosecuted. That made me smile. Coming from a land where people litter streets too easily and leave their trash on the train, I’d love to see it adopted here. It brings back great memories when I see these photos, especially whenever I’ve captured Japanese people going about the very important business of photographing the leaves: salarymen on their lunch hours, retired couples with grandchildren, tourists and country folk from nearby towns.

I do wish I’d had a better camera at the time and taken even more photos. But that makes it all the more reason to go back!

If you want to see more red leaf heaven in Kyoto, take a look at this post on Tadaima. Or check out a post by Tokyo-based blogger Donny Kimball who writes about about autumn in Aomori. I wholeheartedly agree with his observations on fall being Japan’s most beautiful season.

If spring’s more your thing then there’s a post for that time of year too, also in Kyoto. Have you experienced autumn in Japan, Kyoto in particular? Let me know in the comment section.