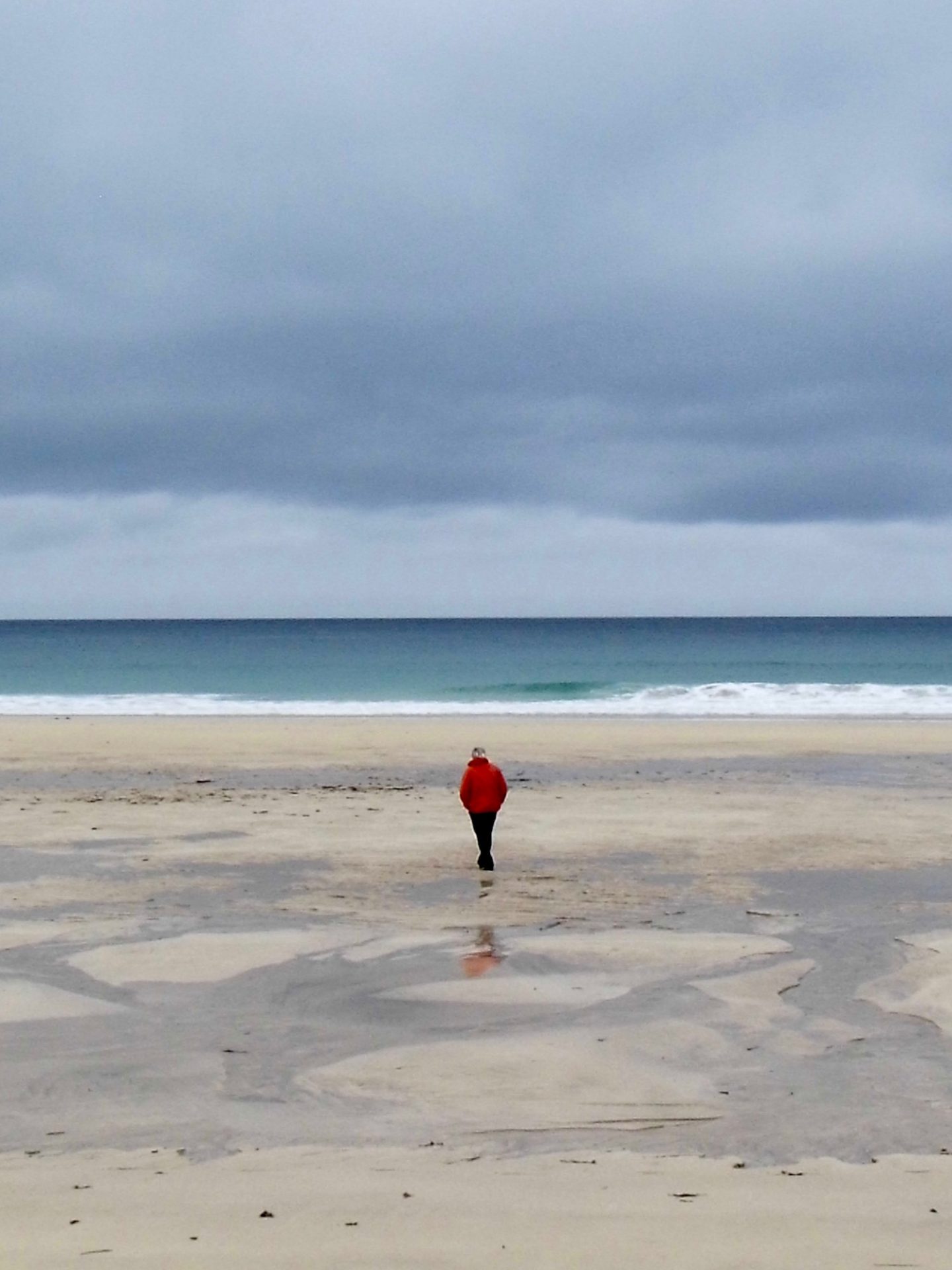 There are a lot of links coming round Facebook right now. Articles on the importance of maintaining social distance and the Covid-19 virus itself. And there are also challenges to post beautiful beach photos.

Meanwhile, I’ve sifted through some photos that I like and chosen seven, loosely on the theme of social distancing. The thing they have in common is that they all involve the sea. Seas connect the world even as they create natural borders between countries and continents (and connection counts for more in my book). And esoterically water represents the feeling function – life, healing and purification. Go figure!

I’ll say a little about further sentiments that they inspire, though expect plenty of space – and blue seas.

A man on a Spanish beach. This was taken in La Herradura in Spain, now well and truly under the grip of social distancing. My sister and her family are in their small flat there as I type, a stone’s throw from that sunny beach. They are not permitted to even cross the road to visit it at present. And if that sounds too draconian, bear in mind the bunch of British tourists who had to be ushered off the beach in Spain. They knew perfectly well not to congregate (and no, I won’t find a link to the idiots).

But back to my photo. My bro-in-law Tony is a professional photographer whose business is one of many meeting challenges during this time. On the day I snapped this we were on our way back from photographing the dawn sky. I’m pretty pleased with this one. I took another before it which only featured the two trees. But Tony liked the man crossing the foreground, in the middle of a task. And for me, the shadows of the palm fronds give it an added frame and allows for that expanse of blue sky at the top.

This is my one and only niece (at present, at least). Again it’s in La Herradura, which translates as horseshoe in Spanish. Beautiful ice cream textures and colours in this snapshot, balanced by the headland and the little girl looking thoughtfully out to sea. Who knows what the future holds?

Both my niece and her big brother, a couple of months shy of fifteen, are apparently handling staying indoors pretty well. They’re a resourceful couple of kids.

The Golden Road on the Isle of Harris in the Outer Hebrides is a single-track road which winds around coastal inlets and small hamlets. It’s the kind of place where you have to keep stopping the car in order to take photos. Like me, you may think that it’s known as golden because of the breathtaking views, but it actually refers to the cost of constructing it. Money well spent – and there’s a fabulous eatery at the end of it, the Temple Cafe.

I guess how you see the photo could depend on whether you’re introverted or extroverted. For many it would be a place to sit quietly reading or contemplating the view. For me though, lovely as this sounds, I’d want to have a group of friends here with me, enjoying a chat and lively banter. I’d at least want there to be someone else to discuss the book with!

Hmmm, but I guess that would defeat the object. You’ve won this one, introverts! 🙂

Alone in my little house

So strictly speaking, this is one of Stephen’s photos. It’s in North Berwick, a mere minutes away from where I lived as a child. There’s the lone figure walking towards the beach and, of course, the Bass Rock out at sea. A nice little bit of self-containment, looking sideways in thought.

But also towards the signposts. Little did I know how the years would unfurl. At this time I was still living in London and visiting Stephen on a regular basis. I still look like a “London” girl here in my Reiss jacket, swanky handbag and shoes. I don’t buy many clothes now, save trainers and yoga gear. Which I can still wear after doing it with some adjustments.

Cheating a bit here with two photos. The top one is in North Berwick once again which I snapped on a fairly recent visit, though long before the lockdown was announced. I took it one mid-January at just after 5pm, hence the deep cobalt blue sky and the harbour lights that have come on.

As a child when I looked towards the sea, I would always be aware of the flickering street and house lights across the Firth of Forth. Similarly the second photo is of lights across the sea, albeit from Wemyss Bay looking towards part of Argyll. I still find lights in the dark on opposite coasts comforting. They suggest that though we may be temporarily alone, there are still others “out there”. An important fact to remember if this social distancing sometimes gets a bit much.

Finally the image you see at the top of this piece. I took this one at the top of this post on a visit to the Isles of Lewis and Harris two years ago. It features my good friend Martin, a self-confessed introvert. As an extrovert, my thoughts of such an image would once have been “Oh poor man… but I wonder why no one’s talking to him? Why don’t I go and bother him?”(And end up ruining his day!)

In fact, Martin may appreciate that lovely bench further up the page. Though I do hope he’d ask me to join him there for a blether.

That said, over the years, I have come to appreciate alone time. It’s been good preparation for now. At the very least this time is an opportunity to recharge batteries. And at the very best, to help preserve life.