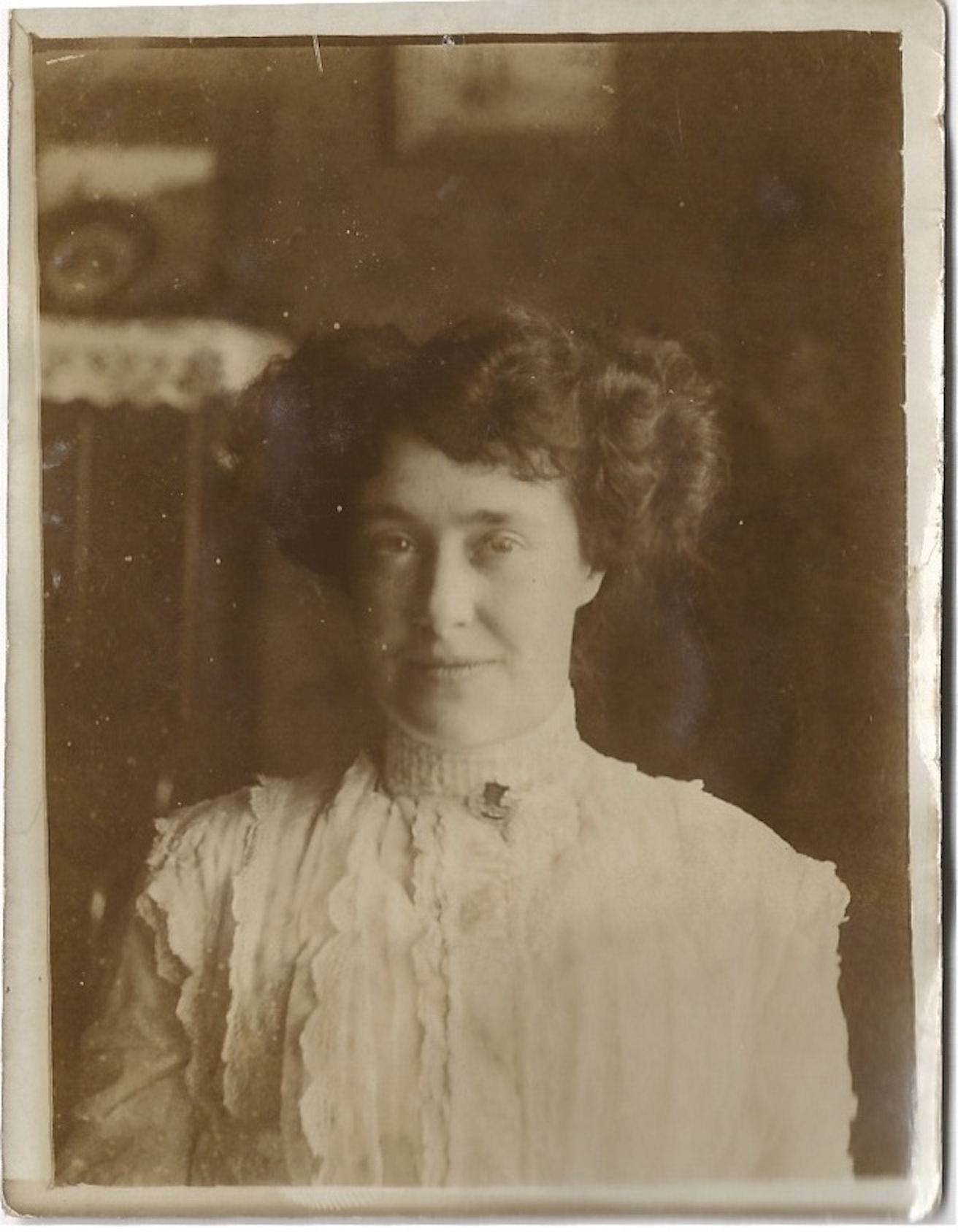 Oh, the joy of going through old family photos! Don’t you love looking back and seeing your parents and grandparents when they were young?

I’m glad my elders only had black and white photography. Therefore my generation grew up really understanding that they hailed from “the olden days”. I love these pictures of my mum’s grannies. That’s Ethel Jordan at the top of this page and Effie Haston above this paragraph.

I remember cantankerous Effie Stewart Haston well since she was my granddad’s mother. And my grandparents practically raised me. Effie grafted to support Harry and his little sister after her husband died in a work-related accident. But poor Granddad was catapulted into the role of Man of the House and “Mother” never loosened her grip.

Ethel died just before my mum was born. Granny Pip adored her mother and I can see why – she looks lovely.

These two shots together show how different their lives were. Effie was a proud working-class woman who rolled her sleeves up when she was widowed. She had cleaning jobs and kept her own Edinburgh tenement spotless. Effie had high standards. She was “black affronted” if ever the minister paid a visit before noon before she finished her housework. And as you see in this studio photo, Effie kept herself spruced up.

Meanwhile, Ethel’s life was very different and Pip enjoyed a relaxed, middle-class upbringing. You can see that they had their own camera. I can hear Granny saying “Cooo-ee Mum, let me take your photo!” while Ethel ran to put on a pretty blouse. However, Pip wasn’t even a pip when this photo was taken. And the photographer would be my great-grandfather, snapped in the early days of a happy marriage. My mum remembers her grandfather fairly well. And he seems to have had some story. Supposedly he arrived in London from Cork aged 12 with his big sister Lou. Despite a harsh start, William Jordan became a very successful businessman. He even rose quite high in the masons, ensuring a comfortable life for his family. He bought and let properties, becoming a local landlord. And a decent one apparently, caring for the well-being of his tenants and maintaining homes.

However, William himself never spoke of his background. He was a secretive man, highly self-educated and totally shunned any religious beliefs. However lowly his start in life, her certainly ended up as an affluent man. Thus Pip and her siblings enjoyed a warm and well-furnished home in a London suburb, a family car and regular days out. And, of course, a camera of their own.

OLD FAMILY PHOTOS OF MY GRANDPARENTS Unfortunately I have little recollection of my dad’s parents who were Irish, also from County Cork. But there are plenty of great photos of Pip and Harry.

Harry first, seen here as a handsome young man. He looks like he’s somewhere he’s not used to, yet still able to hold his own. Which is a reflection of his teenage years actually, for he was a clever boy who passed the entrance exam to George Herriot’s school in Edinburgh. It took him into a different world, hence he landed a job at what was to become the Royal Bank of Scotland.

Not bad for a boy from a tenement in the early 1930s. He still didn’t go onto university post-school – “Mother” expected him to get a job and support the family. But it was a little bit of social mobility in action. Pip was from the other side of the tracks, of course. And her striped top and pleated skirt wouldn’t look out of place today style-wise. It’s a lovely photo of her and a shame my aunt butchered it with those ballpoint pen eyebrows.

I always feel a bit sad when I think of Granny Pip. She was a clever woman and very well-read. She quoted poetry and sewed identical outfits for her two small daughters. But William Jordan saw no point in education for his daughters. He thought they’d marry well and run suburban households. So while his one son attended a minor public school, the girls attended finishing school and learnt to be ladies. Consequently, Pip was ill-prepared for the modern world. But it was a happy life. Besides, the plan was to marry a man from her background with her interests. And she had one in mind.

But then the war came and everything changed for Pip.

BEFORE PIP AND HARRY MET A great snapshot of Pip and her group of “chums”, complete with dog. They look like the Famous Five all grown-up. My dad, her one-time son-in-law, took one look at this photo and sneeringly labelled them “The Posh Gang” (and they do look pretty posh!).

And there’s one of Harry’s pals too. I’m guessing he took this picture in Canada where he spent some of the war doing his RAF training.

In a strange way the war years were my grandparents’ freedom years. Pip gained a life outside the home. She spent the first part of WW2 in the Women’s Royal Air Force on flight control during the Battle of Britain. This was an emotional task for her and the other women. They would become friendly with the men they chatted to, but would never meet. Many a young pilot promised to take a particular lady out when the war ended. And, of course, many of them died long before it did. There were a lot of tears.

Pip’s great love Ken was one of the young men who didn’t see the end of WW2. He didn’t die in action, but in the course of his job as a motorcycle courier. Later on Granny joined the Land Army where she learnt to drive a tractor. This was emotionally less taxing and she met Harry, himself mourning a lost love, albeit someone alive.

Harry’s big romance was with Mary from Skye, a lady he always remained friends with. But “Mother” wasn’t having it. Mary met Effie and witnessed a mother-son relationship that would’ve given Freud a run for his money. And Harry, long-in-the-tooth at 29 to Pip’s 31, couldn’t face another rejection and they married before war’s end, far away from Effie’s interference. And so here’s Pip at her pippiest. Out gallivanting with Ken – and no helmet hair for her!

Perhaps the introverted Harry saw the feisty, outgoing Pip as someone who’d stand up to Effie. But the young couple settled in Fife, far away from Pip’s comfort zone. “Mother” made it her business to make my granny as miserable as she could – and lived to 88.

How I miss Granny and Granddad, aka Pip and Harry. And how easy it is to forget that our elders were once young themselves. The sensible man at the Royal Bank once collected jazz 78s and danced with pretty girls. The silly lady who got stuck on the roof because she’d forgotten the house keys once raced the countryside on a Royal Enfield. Both knew personal heartache and were completely mismatched. But they brushed their differences aside to raise children. And give me a happy childhood in Scotland.

As I fast approach the age my maternal grandparents were when I was born, I think about how much more they’d achieved by that time on many levels. Losing prospective life partners, living through a war, raising children. And then taking on a grandchild.

I’m glad my life experience and choices have been different. But I do wish I’d asked Pip and Harry more questions about themselves. And that I had some more of their stories to go with these old family photos. Do you have family photos you ever look through? What stories do they bring up for you? Leave me a comment below.