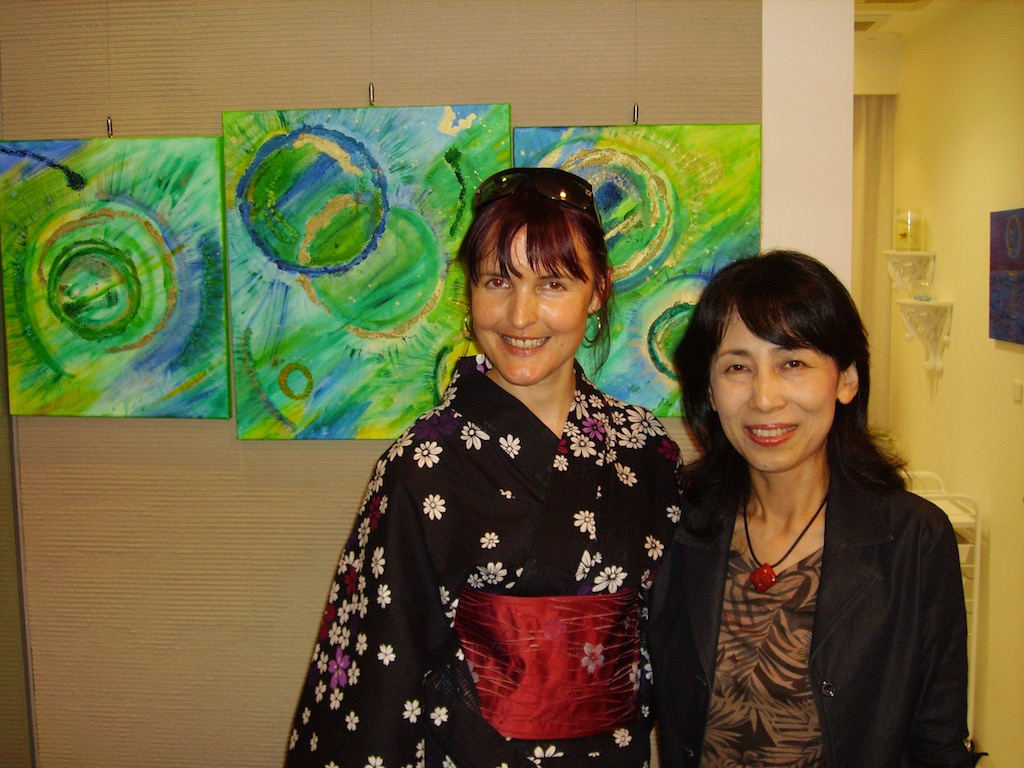 Around this time eleven years ago I had my first exhibition in Japan. My first solo art show anywhere, in fact.

It was at the Art de Art Gallery in Takatsuki and was one of the highlights of my time there. Although I’d only been painting for eight months, the gallery offered me a short stint. Professional leaflets and postcards were made, contact lists mailed… and people came to the show!

I certainly never expected to have an art exhibition when I arrived in Japan in late 2006. When I did I came with the expectation that I’d be taking a break from my glass art for some time, since it would be expensive to maintain. Not only that, but I didn’t have the vocabulary to source materials or premises to work on my glass. With that in mind, I picked up some paints and canvases from an art store in Osaka station and got to work during the Christmas break.

HOW I HAD AN EXHIBITION IN JAPAN I made a good friend at yoga called Tomoko and each week we’d go for a coffee after class. One week we decided to find a different cafe to our usual one. It was on the backstreets on Takatsuki that we spotted a health spa with a board outside advertising an exhibition. Not only were there a few paintings brightening the place up, it was a proper gallery.

One thing I like about Japan is how many shops combine two businesses under one roof. For instance, in Tokyo I had coffee in a cafe with an opticians at the back. Another cafe I liked was part of a cellphone shop. It’s a good business model.

Yukiko is the owner of the Art de Arts Gallery and she liked my work. Unfortunately the gallery was heavily booked up till the following year. However, seeing as I was possibly leaving Japan in October she rejiggled the schedule, giving me two weeks to show my work in September. And now I just had to create some more work.

HOW I ORGANISED IT 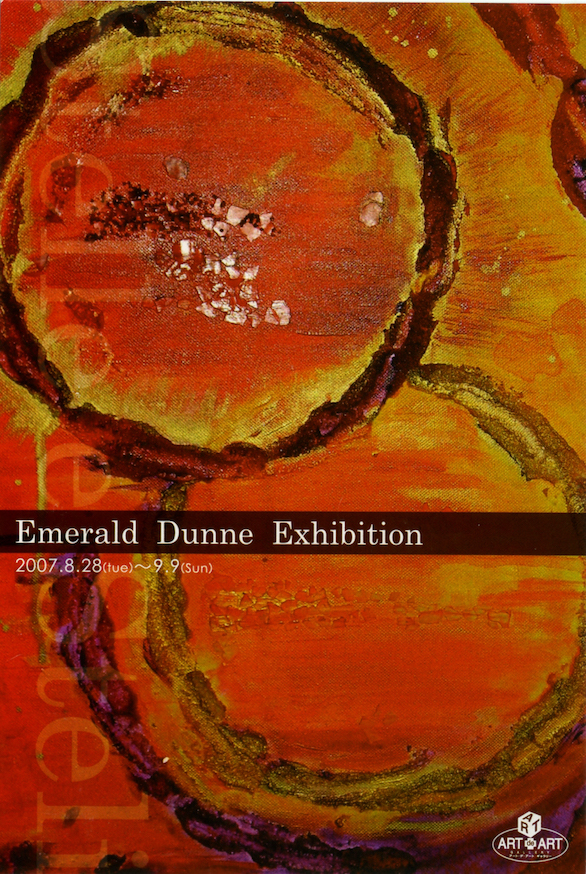 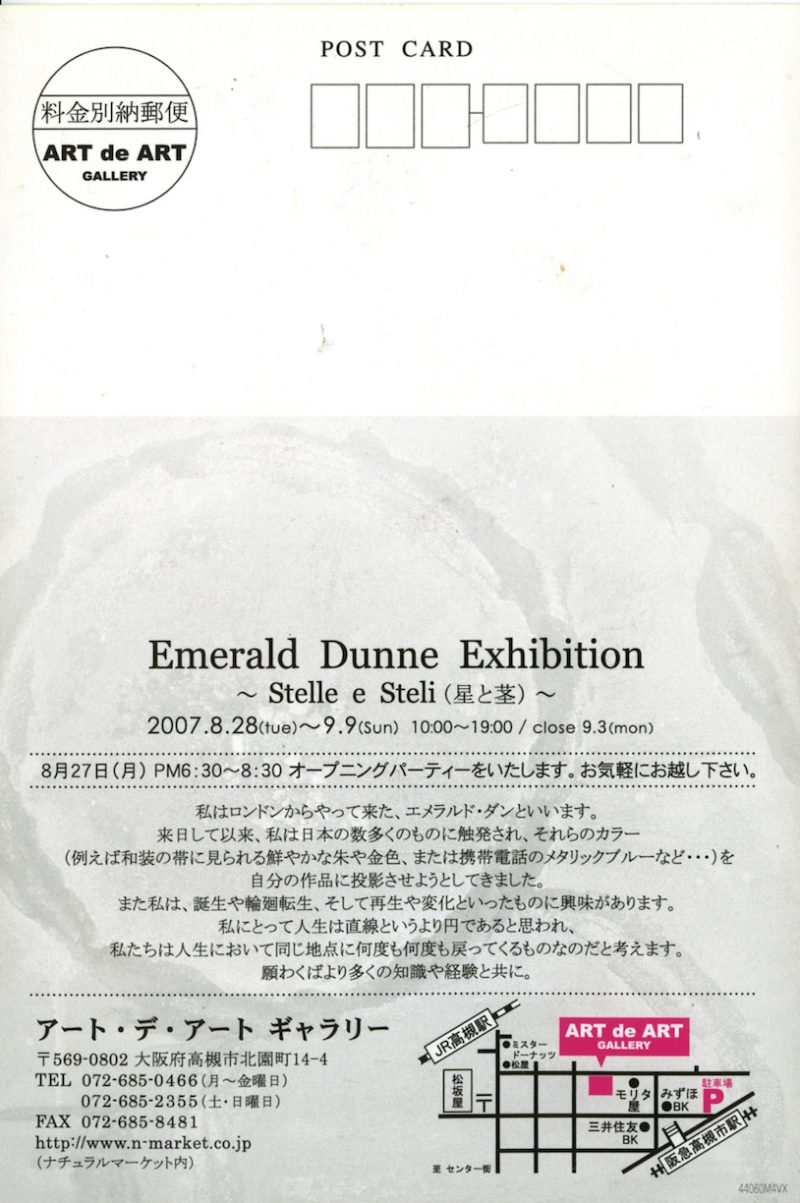 My Japanese skills were pretty minimal. They’re a bit better now, although I still only speak it. So it went without saying that I’d need a hand. Without me even asking, Tomoko liaised with Yukiko to organise my show. And I only knew about when both of them had finished. Tomoko translated my artist CV into Japanese, wrote up an artist profile and got in touch when the gallery needed photos of my work.

One of the things that helped was a write-up in the Big Issue Japan (see below). My dad works for the UK branch and he put me in touch with the office in Osaka. In fact, it’s partly on his advice that I ended up in Takatsuki as it’s also close to Kyoto. He had a feeling I’d like the temples and he wasn’t wrong.

Yukiko’s staff also made up these wonderful postcards and printed out two hundred and fifty of them. We were good to go! Well almost. If I wanted an exhibition in Japan I would have to sacrifice the things my friends enjoyed. Therefore I missed out on a beach break with three girlfriends who were fellow English teachers. But working hours in Japan are long and materials cost, hence I needed to make a choice. I wanted to have enough work to fill the space, which meant getting out the paints as you’ll see below. I’m pretty proud of the fact that I was so tidy as I worked. The company I worked for provided the small but more than adequate flat. In addition, it was a great lesson in working from home.

Here’s a great post from blogger Mikko Sumulong about arts and crafts stores in the Osaka region if you just so happen to be reading this from there. She mentions the fabulous Tokyu Hands which you’ll find in major Japanese cities. They have a department for art materials as does Loft, one of my favourite stores in Japan (good practice for your Japanese reading skills as there’s no English version of the site!). 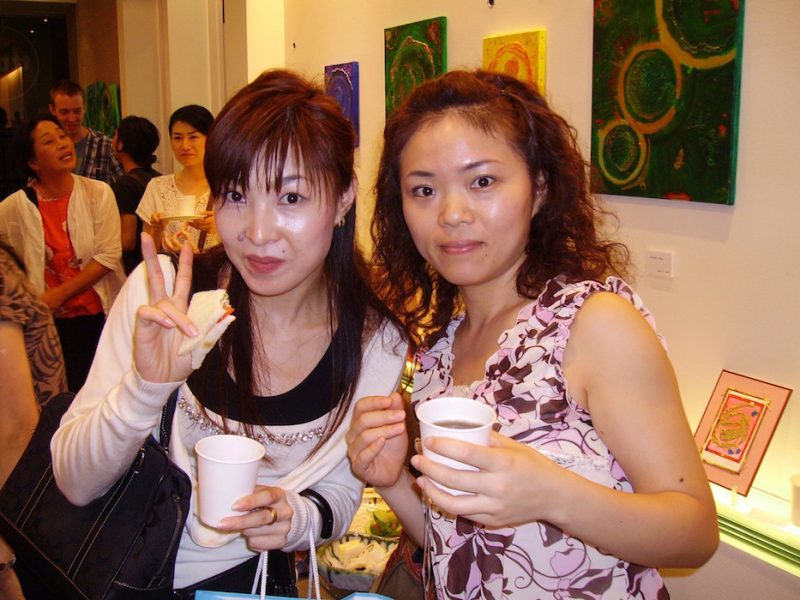 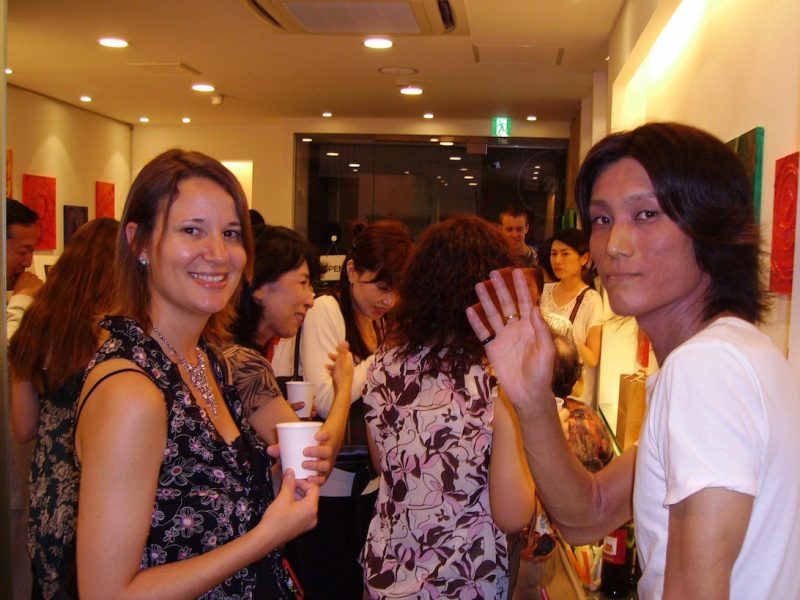 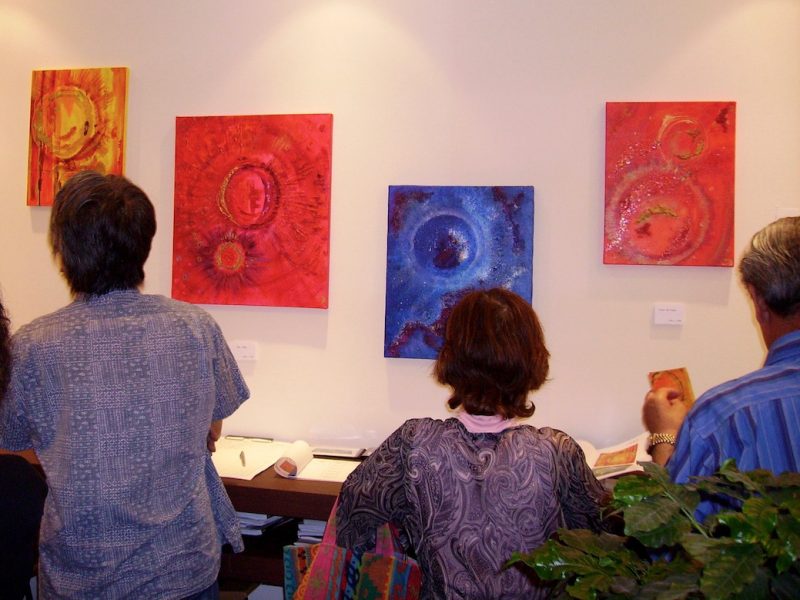 The day of the show I arrived early with my new yukata and obi in my bag. Yukiko’s friends were already setting up when I got there. After we’d done so they helped me to put on the yukata then set out wine and crackers.

But would anyone come?

Here’s your answer. After a quiet first ten minutes everyone arrived at once and to use a Glaswegian word, it was hoachin’. It was a fair mix of friends both Japanese and western, plus Yukiko had contacted everyone on her mailing list. I’d even invited the lady in the art shop at Umeda station, not expecting her to make it. But she did, as did a local artist who I practised my Italian with.

A great success all round and an evening I’ll never forget. And all thanks to the wonderful ladies who put so much into it.

HOW AN EXHIBITION IN JAPAN HELPED MY CAREER Apart from a good write-up and some lovely postcards advertising the show, I sold two paintings. And not the ones I expected would go! Yukiko told me that another artist had bought them to put on display at a local hospital. To this day I believe my work remains in the public domain. Regrettably, I don’t know where it is, but it’s out there somewhere. 🙂

Naturally, I should find out because it’s something I can put on my artist CV. Plus I’d also like to add a link to the Italian-speaking artist I met, seeing as he was also exhibiting in the town at the same time. The show certainly boosted my resumé. Not everyone can say they’ve had an exhibition abroad, especially one where they’ve sold work and had a write-up about.

Speaking of which, here’s a great piece in the Big Issue Japan and some lovely postcards advertising the show.

DID BEING IN JAPAN INFLUENCE YOUR WORK? In a word, yes. For example, you can read about how much I love chiyogami paper, which I discovered in Japan, and how I use it in my work. And a glance at my About Me section will fill you in a bit more about my artist self.

As a postscript I can add that I did have another show, which I will no doubt write a little about later. It was in Kitakyushu, the town I went to next. By now my Japanese skills had advanced a little and I was able to organise it solely on my own. That’s a story for another time.

Do you remember your first exhibition? Or if you’re not an artist yourself, have you done something you’re proud of? Let me know in the comment section below.