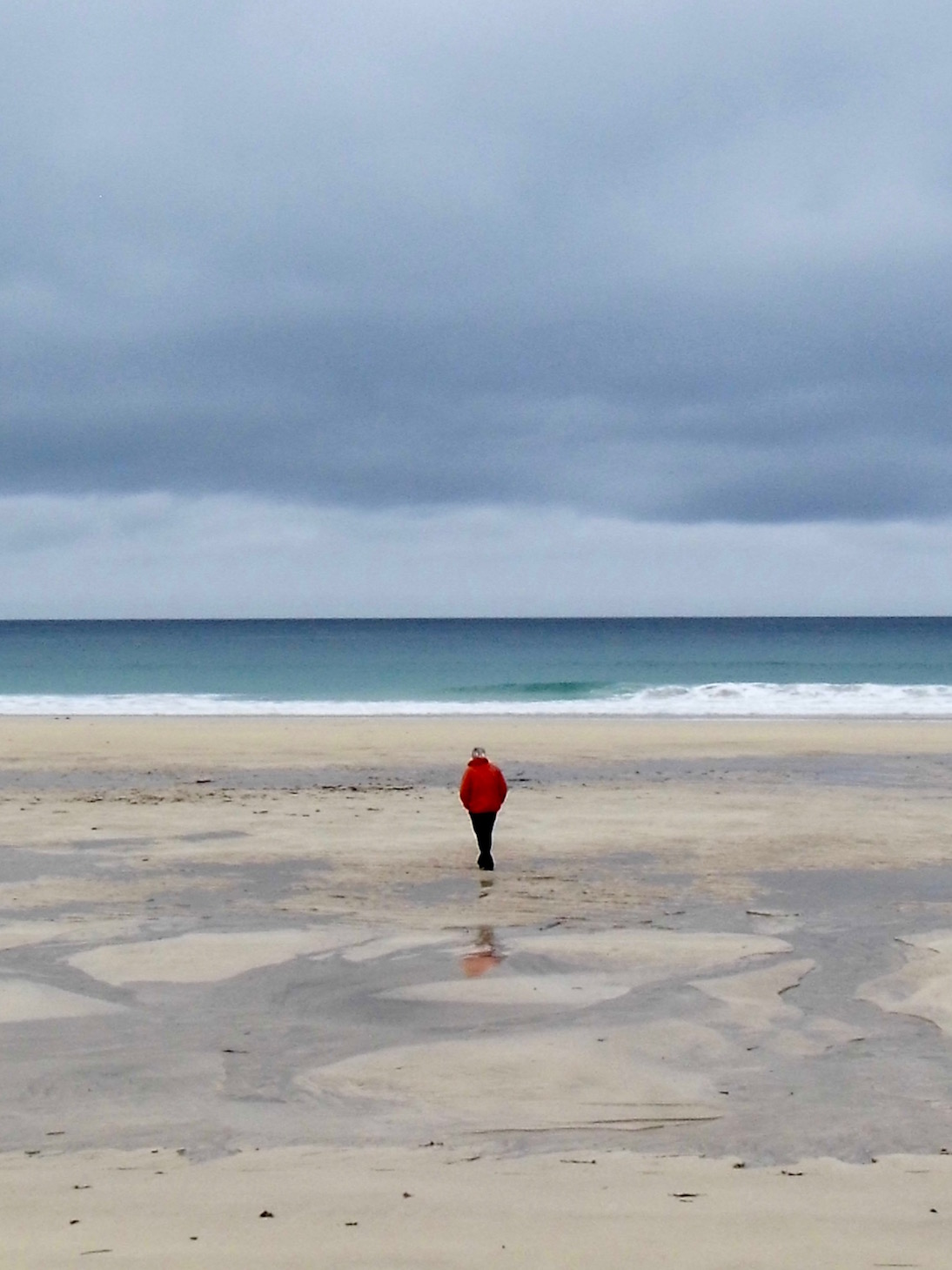 It’s nigh-on impossible not to be inspired by the wild land and seascapes of the Outer Hebrides. I went there with creative block that had been hanging around for several months. And left it there.

My thanks go out to good friends Martin and Babs who invited me for a visit. And there’s Martin himself  in his orange biddy, a lesson in opposite colours contrasting with the duck egg blue sky.

Inspired by other artist’s work these past few months, it was my plan to build up a selection of sketches that I can use for seascape paintings. So here are some of the drawings that will help with three paintings I’m planning. Plus a wee bit about what I learnt along the way. And why drawing from life is always the best preparation you can do for a painting. 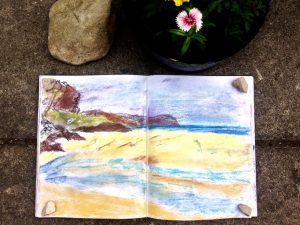 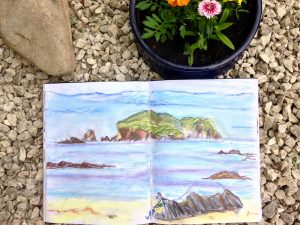 The beaches of Lewis and Harris are some of the most beautiful ones I’ve seen. I grabbed my trusty pastels and did these three in around fifteen minutes each. Indeed, I wrote more about the places I saw in my last post.

At Traigh Mhor (left) I loved the pools of water across the sand at low tide, as well as the headlands of rock jutting into the Minch. I’m looking forward to capturing all that in a painting. On the top right the rock islands at Bernera had me fooled. From the beach I could see one big island, though thanks to passing ship that sailed through the “middle” I learnt otherwise. Meanwhile, Luskentyre beach, bottom right, was the stuff of dreams with its turquoise sea and white sand – is this Scotland or Greece?

Oh, for more space in my luggage! If I could add anything to my sketches, I’d have used a wider selection of pastels colour-wise. Plus done some follow-ups in watercolour pencil. However, when planning a painting at a later date, the biggest lesson as always for me is simple. Sketch what you see and don’t only rely on photographs, even though taking a few reference ones is a good plan. I do love stone circles! And if there’s one thing I miss about living in London, it’s being so close to the charming village of Avebury with its very own living and breathing towers. And sheep!

So Callanish is a joy. While it won’t be a seascape, it wouldn’t have been a trip to Lewis without a stone circle work in the pipeline. Creating a painting of the stones will be a good exercise in perspective. In addition, it’ll give me the perfect opportunity to break out the Golden Crackle Paste for texture galore and a hint of 3d. Martin and I popped down to Tolsta beach on the day I was leaving, two hours late for the sunrise. But still in plenty of time for me to capture the magnificent sea stacks, fissures heavily defined in the keen morning light, heavy blue shadows from the massive rocks, the tide out to reveal rockpools and wave patterns on the sand.

I did four sketches, but there are things I’d add if I’d had more time (and space in my bag). One, a bigger sketchbook is the thing for impressive objects. Secondly, a charcoal or pencil follow-up would’ve been great for that definition in the rocks as well as the light and dark.

To my mind, the more preparation for an artwork the better. It shows that you understand what you’re painting in terms of space, shape, colour and texture. Even if you plan to totally abstract your final piece.

When I lived in London, I could only dream about visiting the Hebrides. For one thing it’s too expensive to fly here. And since a train and bus journey would take nearly two days, it’s not an obvious holiday destination for most. Far easier – and cheaper – to plump for Spain, Italy and Greece (which I’d do happily too). Cold Scottish beaches? Bring ‘ em on!

In many ways my visit to Lewis and Harris put me in mind of our whistle-stop trip to La Gomera earlier this year. The adventure of going somewhere only a ferry can take you and the universal love of being surrounded by water.

In my life I’ve lived on three islands, though I’m pushing it a bit with the UK and Japan since two of them they’re actually island nations. But it’s enough to affect national psychology, which we’ve all too much of that these past two years on our sceptred isle. Photo by pal Martin Gaughan. He’s the orange speck in the photo at the top too!

My plan is to use my sketches to do four or five seascapes. So far all my coastal work has been from around North Berwick, particularly the Bass Rock (and I still some of them to finish). I’m looking forward to capturing wilder and unexplored shores using similar techniques. Not to mention writing a blog post or two about how I approach my seascape paintings.

Until then, expect expansive beaches fringed by rocks. And maybe the odd lighthouse putting in an appearance.

Where have you been lately that you’ve found inspiring? Drop me a comment below.