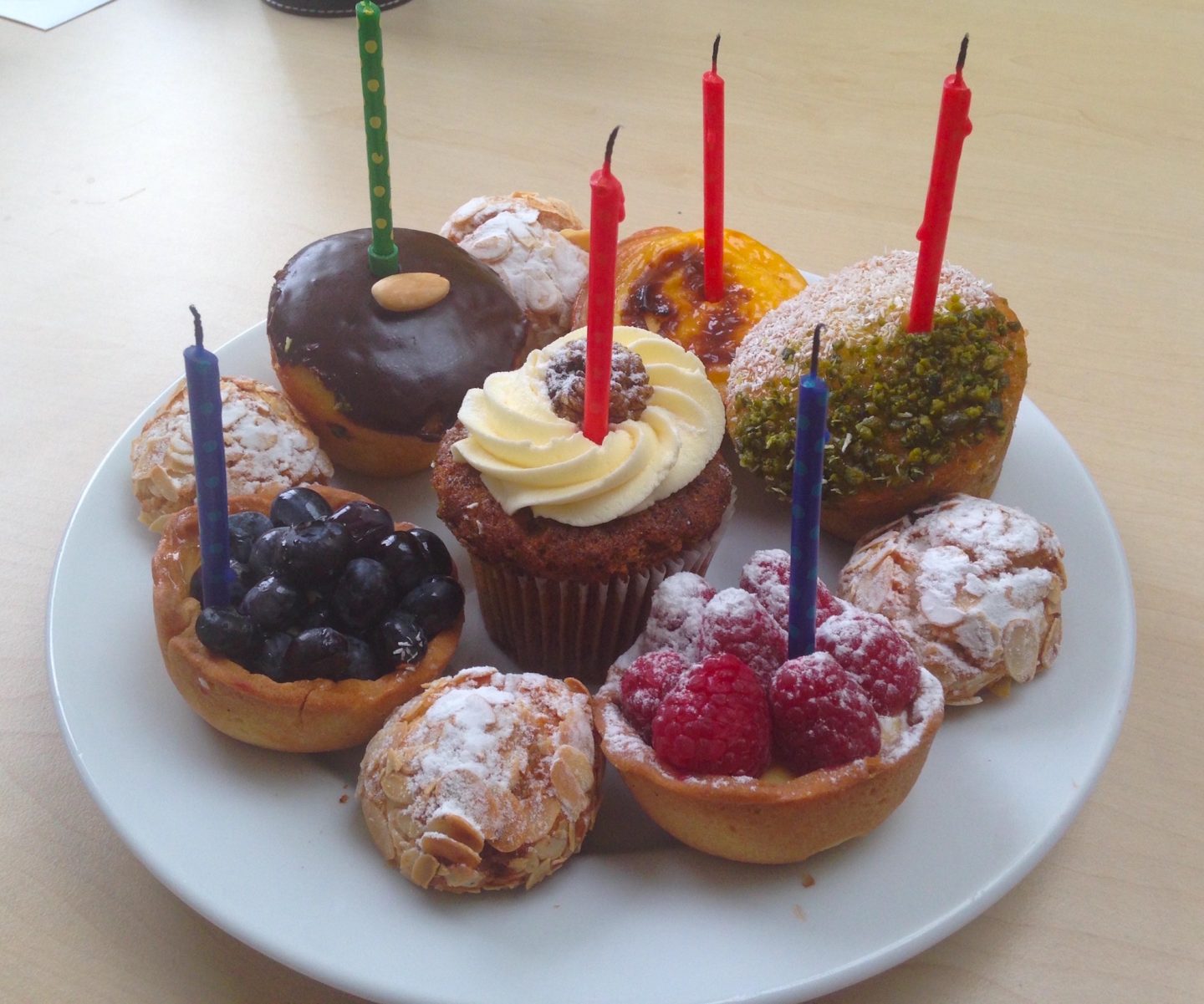 Last Friday was my birthday. Not a big birthday, but a memorable one nonetheless since we’re in lockdown.

I enjoy celebrating birthdays and ideally would like to do so around other people. However, I did have a great day and spent it doing things I enjoy. I decided to have a look at few other solar returns that are seared in my memory, mostly good but one or two much less. Let’s start with one when I was a child. Not the bad one by any means – but a good example of my Granny being a bit of a tube. You see, Granny Pip arranged a dental appointment for me on my eighth birthday! Now, I appreciate that this is going to make my grandparents sound like utter sadists, which they absolutely weren’t. But Granny was an opportunist. And Granddad thought “Ach, well we can have your birthday another day.”

The timing of my appointment was for good reason as my birthday frequently fell during the Easter holidays. I guess in her infinite kindness she figured that I’d see the dentist in Musselburgh then we could go get an ice cream at Luca’s to celebrate.

‘Twas not to be. I mean yes, I did see the dentist and got a filling in those sugar-soaked, drill-happy 1970s dental days. But of course I couldn’t have an ice cream while the filling was settling. We did, however, spot two of the soon-to-be-famous Bay City Rollers on the bus on the way there (well I did, Granny was none the wiser). And Granddad Harry arranged to meet us after work and drive us home.

Harry did indeed collect us. And while we were in Musselburgh, Pip said to him, “Hey, why don’t we go and look at bicycles?” And so we drove home, the car replete with my chuckling grandparents, two new bicycles and a bairn with toothache and no ice cream. Over the years, Granny Pip would occasionally laugh as she reminded me of the fun they’d had while I’d been to the dentist. Here I am on the first day of the second year at Tiffins. Cheating a wee bit here because it was a good few months before my thirteenth birthday, but still. I was now living down south in suburban London, thanks to my mum remarrying and my having resettled with her. But my grandparents, who’d more or less been my parents, wanted to be near us and so flitted. It must’ve been a real wrench for Harry to leave his native Scotland. Pip too, although she was returning to the neighbourhood she’d grown up, missed North Berwick a lot. As did I.

So here I am in Granny and Grandad’s garden. And my birthday this year was a school day. Which was lucky because I got to school to receive lots of cards and a few fantastic gifts; Sound of the Suburbs by the Members and Everybody’s Happy Nowadays by the Buzzcocks. And before I even left for school I woke up to find Blondie’s Parallel Lines and the book of the David Attenborough series Life on Earth. I still have all of these gifts.

Turning thirteen was the start of my happiest musical memories. The first and only time I’ve actually had a party in my house, excepting childhood ones. My flatmates Steve (the red devil below), Lisa and I thought we should make it a fancy dress one.

I was amazed at the effort that people made. While Steve, his friends (those four boys in photo underneath) and I made our own outfits – Steve was a red devil, borrowing my jumper and blusher and some copper piping from the neighbours while I was a “Madonna fairy” – some of our friends really went to town. It’s not hard to spot the ones who went to a hire shop. So I couldn’t resist posting a few.

Some of these outfits may not pass politically correct muster in this day and age. But I did have the best outfit in the history of fancy dress ever, of that I’m sure – a tomato! 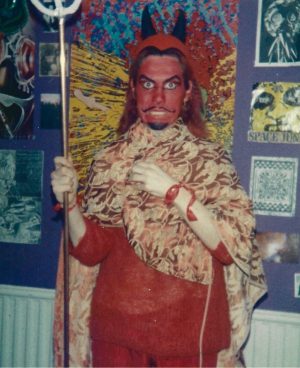 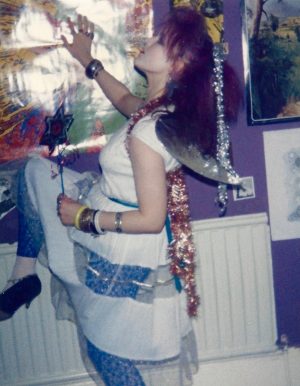 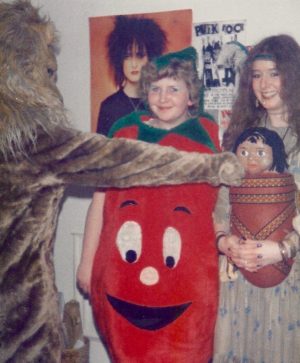 TWENTY-SIX – NOT A HAPPY BIRTHDAY So this is the “bad” one, but I did learn valuable lessons. My beloved grandparents were long gone and the most important people in my life were my friends. Plenty of them were damned fine friends too and every weekend we’d be out clubbing. I’m still in touch with the ones who had a bit of substance to them, albeit on social media since they’re scattered around the globe.

But the problem with being a party animal is that you met a lot of folk without it too. So on my 26th I found myself sitting in a room of people, only two of whom who were my particular friends. The party itself was organised by someone who wanted to gain a social foothold in the group. And it was a party for her. She threw herself into organising it with aplomb, and I went along with it.

I hated it. And one of the few introverts of the group clocked I wasn’t enjoying myself at all. It would take a few more birthdays till I found my feet and I’m glad I did so relatively young. 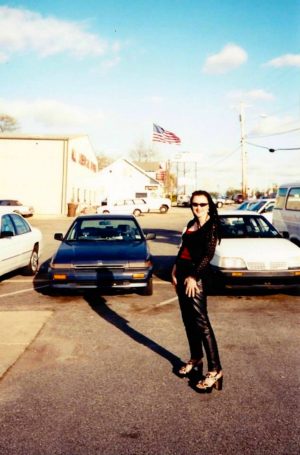 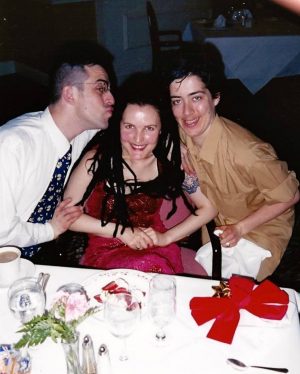 I had a lovely group of mainly gay friends, most pretty outgoing like myself. But people I could talk to. Our social lives didn’t just revolve around parties, though there were a lot of them.

My friend Andrew was living with his fella in North Carolina, so I took advantage of my second US visit in a year. My thirties were a time for developing my creativity further and setting up a glass art business (soon to be relaunched). I was fortunate to be able to visit the States at long last, plus visit friends around Europe. And like many of us, I thought my thirties would last forever.

Despite the fun I’d had living there, towards the end of my fourth decade I was beginning to tire of London. And by the time 39 came I’d made up my mind where life would take me next. And what I would need to get me there.

A BIRTHDAY IN JAPAN As my thirties were bowing out, I took and passed an English language training course with a view to finally visiting Japan. I was lucky enough to see two birthdays while I was living and working there. And because it falls in early April the beautiful cherry blossom was in full swing. Here I am on the day itself in Gion with my friend Yuko with some German tourists we got chatting to. In case you’re wondering it’s pretty common to see Japanese women out about in simple kimonos or summer yukatas.

Kyoto is the major Japanese city which contains this slice of Old Japan. And it’s where I first encountered the chiyogami paper that I use so much in my artwork. Throughout the day I had an insight into how Japanese people greet the spring. I’m aware that the hanami parties and cherry blossom viewing isn’t really happening this year which must be disappointing. I love this part of Japanese culture and hope to experience it again one birthday.

Next time I won’t be traipsing round down in those Karen Millen zebra pattern shoes though! How on earth did I walk round Kyoto in those? If my recent birthday was a bit of damp firework, I can content myself that it wasn’t a big birthday this year. And that the place I love most on the planet, where I did celebrate my Big 5-0, is a mere two hours drive away. And so a belated celebration awaits me.

I had a great weekend celebrating this birthday in North Berwick. I figured that since I’d come into the world here (more or less), I should make a return visit fifty years later. I still enjoy celebrating, being out and about and meeting friends, but no longer feel the need to combine the three at big loud parties.

I spent my big 5-0 with Stephen where we did more relaxing things like meet talented local artists, sit and sketch on the beach… and climb big rocks on the beach. And just as I decided to move on a decade earlier, so I made plans to move “back” to Scotland after most of a lifetime away.