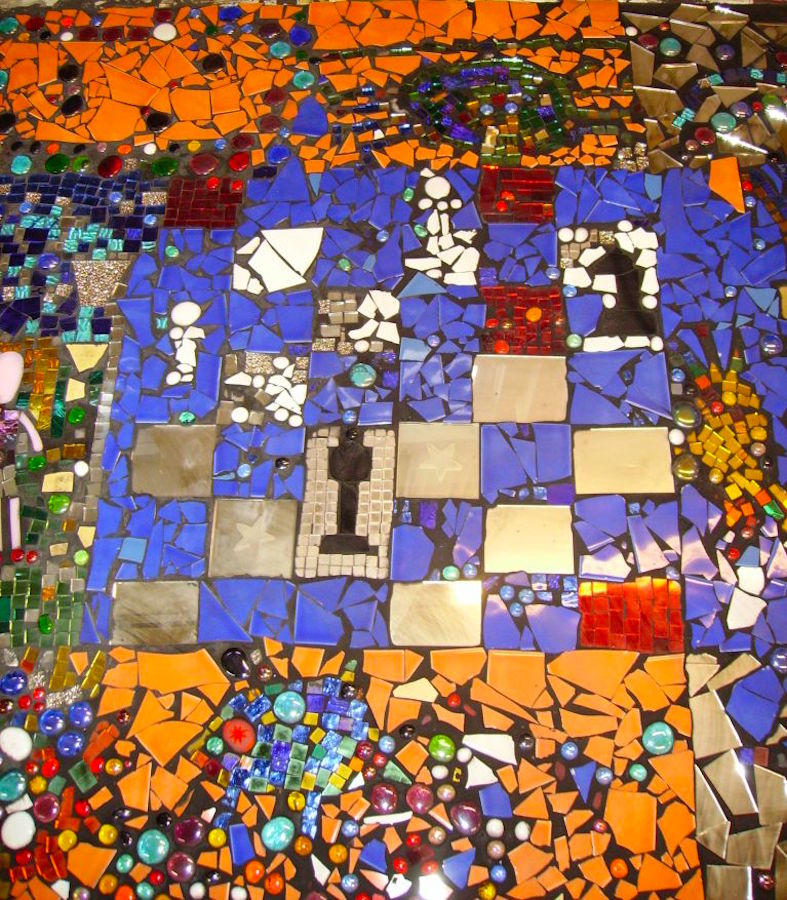 I do love working with children, such as this kids’ mosaic workshop that I oversaw many moons ago. This bright and cheerful project took place at a primary school in east London.

The subject was Games from around the World, a great title that the school gave me to work on. I would be working with Key Stages 1 and 2, therefore kids between 5 and 10. There were different abilities to oversee and make sure they all contributed towards the finished mosaic.

This is one of a few projects that I’ve facilitated with primary school-age children. And it’s always such good fun. Young children are endlessly creative and enthusiastic. Plus it can be the perfect opportunity to tie in their school lessons with something artistic so those key subjects sink in.

Before I even started the classes, I sent a message to the school: Please ask parents to root around in their sheds and donate old tiles. I also popped in to a local home improvement store and asked if they had any old ones that they couldn’t sell. They donated boxes of bright orange and dark blue ceramic tiles.

I wanted to use materials that would otherwise go to waste since it’s good environmental practice. I was very pleased that we had such bright and buoyant colours to work with (and opposite ones!). I also picked up some opaque glass and glass jewels from Lead and Light, my stained glass supplier/store when I was living in London.

WHY A KIDS’ MOSAIC CLASS ROCKS Kids love having a hand in designing something that’s going to be a permanent feature at their school. It’ll be there long after they leave. And it’s fun to work in groups with their friends.

But most of all, they love smashing tiles!

Yikes, I’d better clarify that last statement. I permitted the Key Stage 2 children only to break up the tiles under strict adult supervision. The tiles were wrapped in several layers of newspaper, in addition safety glasses and gloves were to be worn.

Afterwards, we used ordinary school PVA glue to stick the pieces onto a sheet of MDF. The younger KS1 children stuck down pieces to make some smiley faces and patterns around the edge. Meanwhile, KS2 kids chose twister, netball and chess as their games which would fill the middle section. And this is when the fun started.

If you look at the chess section, you’ll notice that some of the squares don’t quite hop-scotch. It was too late to change them once they were stuck down, but I think it adds to the charm. But look, the kids did make those brilliant chess pieces for the board! Because it’s London, I directed the children to make a really inclusive piece. Therefore, the kids playing netball reflected the demographic of the school itself. The children at the school were Nigerian, Irish, South Korean and Indian origin, as represented in the piece, among many other nationalities. For me, one of the joys of living in London was the whole world was there. It makes it a special city.

The dark grout applied at the end really set those bright colours off. And then all it needed was a good clean (and then  few more!).

I’m smitten by these beautiful mosaics created by Liz Tiranti. And particularly love this school project that she worked on. My project is a bit more rough and ready than hers since mosaic is not my speciality. But I hope the end results manages to convey an explosion of colour and energy.

I was happy that all had the opportunity to do a little piece each. For me, these extra-curricular art projects are not only fun, but a great release from an almost constant round of exam preparation and results.