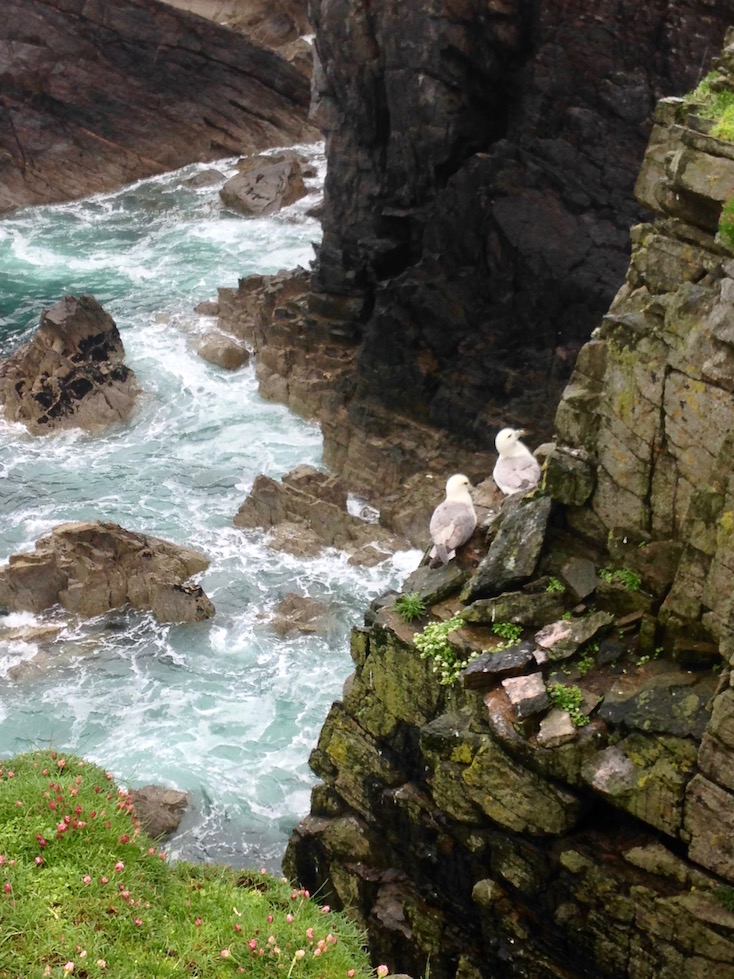 For the purposes of this post, Outer Hebrides only means the isles of Lewis and Harris. But there are plenty more that coil from the southern tip of the largest Hebridean islands.

In actual fact, Lewis and Harris are but one landmass, although they’re known separately as the Isle of Lewis and the Isle of Harris. And I visited to recover from radiotherapy in mid-May, hosted by two friends near Stornaway. Not only did the break help my physical health, it got me reaching for my sketchbook. And it’s bound to have the same effect on you!

So what is there to attract the artist to the Outer Hebrides? Here are my 6 favourite things: A definite earthy pallet of muted browns, greys and greens can burst into technicolor when the sun shines. In turn, a turquoise sea with foam like handmade lace may about-face into deepest slate with angry waves of surftastic heights.  These Hebridean colours and textures inspire Harris tweed, which to my surprise, also comes in bright patterns. The hard surfaces of the rock and stone contrast with the suppler ones of the machair and the tidal marks on the sand. In mid-May in the Outer Hebrides you can expect seventeen-hour days. Photos I took in my friends’ garden at 10pm prove it was still bright (I posted them on Facebook to see my London friends’ reactions). That’s perfect for long days of painting or sketching en plein air. In addition, the light and big skies engulf you. And no more so when you’re on one of the many… While I was here I saw many, each one more stunning that the next. The picture above is Bernera beach itself an island off the main island. Following on from that, we drove south to Harris, giving a young hitch-hiker a lift to Luskentyre beach where we were heading ourselves. The white sand and bright azure water could easily pass for Paxos or Thailand (and indeed once did!). And when you look out to sea on Eoropaidh beach, there’s a real sense of being at the edge of a continent. Next stop Canada! Lewis is home to Callanish as well as plenty of smaller, less-renowned stone circles. On the two occasions I visited there were a fair few visitors, many on coach trips from mainland Europe. But there were also folk happy to meditate within the circle and absorb some of its ancient energy. I don’t blame them – it’s certainly a special place.

Sketching these stones is a great exercise in perspective with all the different heights and visitors milling about, plus the backdrop of sky and machair. What’s more, sitting close to them with your sketchbook allows you to see pink and rust veins that run through the grey stone and the shadows that create abstract patterns on the surfaces.

And all of a sudden, the light can change. If your taste is for more natural, less organised rock forms then the Isle of Lewis has that too. A visit to the northern tip of the island, the Butt of Lewis, blew me away. Almost literally as I got as close to the edge of the huge cliffs as I could. The seabirds have made themselves at home there as have pretty flowers. And on the eastern side of Lewis, facing the Minch and north of Stornaway is the amazing beach of Tolsta. I can imagine this place on Game of Thrones, huge sea stacks climbing out of the sand and the dragons taking a nap in a sea cave.

6. WILDLIFE OF THE OUTER HEBRIDES These woolly creatures are everywhere, especially on Harris at this time of year. As a result they’ve earned right of way on the island’s Golden Road. It’s great to see how nonchalant they are around we humans. Bernera beach, meanwhile, boasts a flock of them with added Highland coos for all who like to capture Scotland’s national beasts.

Lewis and Harris have no shortage of seabirds – gulls (herring, great black backed and common) and Arctic terns – settling in at their summer residences. Plus everyday garden birds such as goldfinches and blackbirds as well as oyster catchers and buzzards.

I took the scenic route. A super-early train from Glasgow to Inverness took three and a half hours. During my brief stopover I managed a couple of sketches, plus a wonderful vegetarian lunch at Nourish. From there there was a coach to Ullapool, before jumping on the ferry to Stornaway for the two and a half hour sailing. All in all, by the time I arrived it felt like I’d had a proper journey. And the total return trip cost me less than £50 return, a no-brainer compared to the exorbitant air fare.

If you’ve got wheels then there’s always the way my partner once took – Glasgow to Skye via the bridge then a ferry to Tarbert on Harris.

DID THE OUTER HEBRIDES INSPIRE MY WORK?

Absolutely. A period of artist’s block, due to my health, came to an end as I quickly filled up my sketchbook. My next post will be about the work I did and the next steps I plan to take. Have you been to Lewis and Harris or any of the other islands of the Outer Hebrides? Let me know in the comment section.