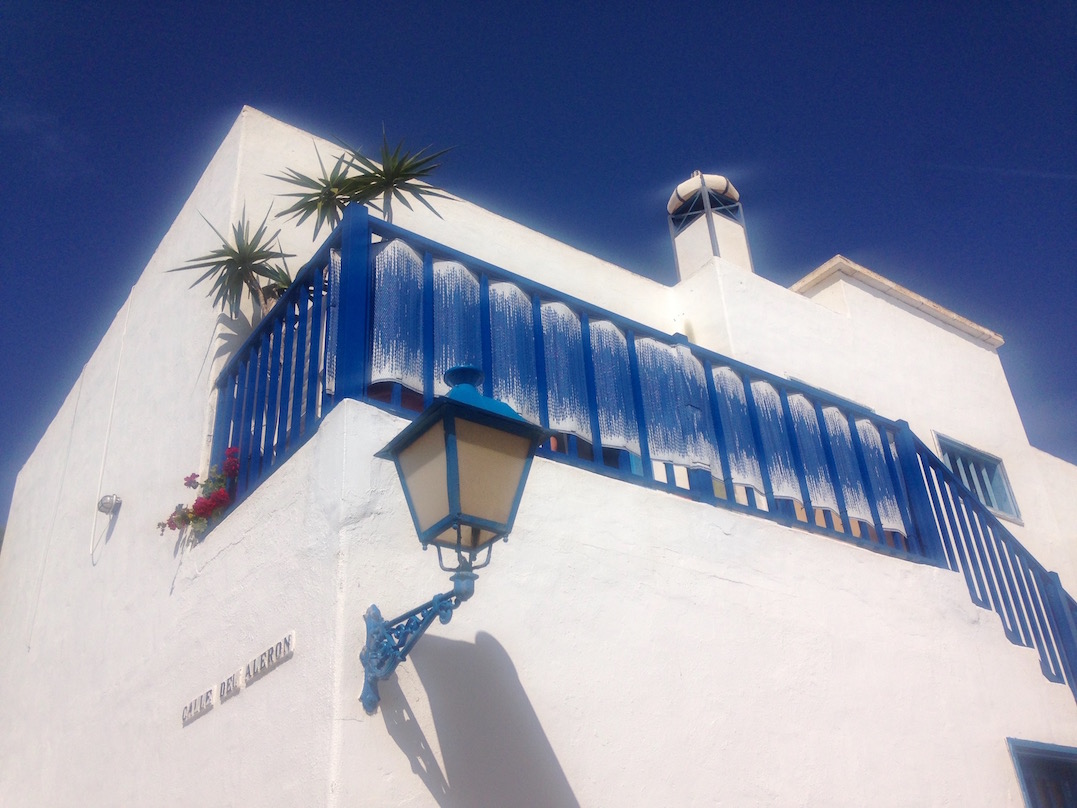 Following on from our brief trip to Costa Teguise in Lanzarote, here are eight things that I found inspiring an inspiration as an artist.

Whether it’s something sketchworthy or another that sets you up for a day of creativity, Lanzarote is just the spot for a painting holiday if you’ re planning to head somewhere warm with your paints and pastels 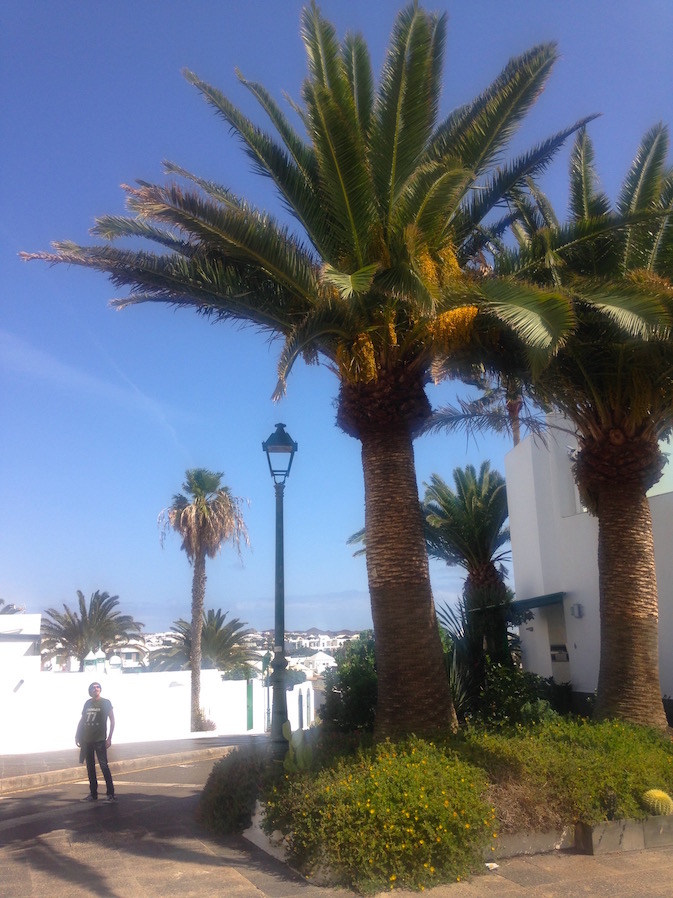 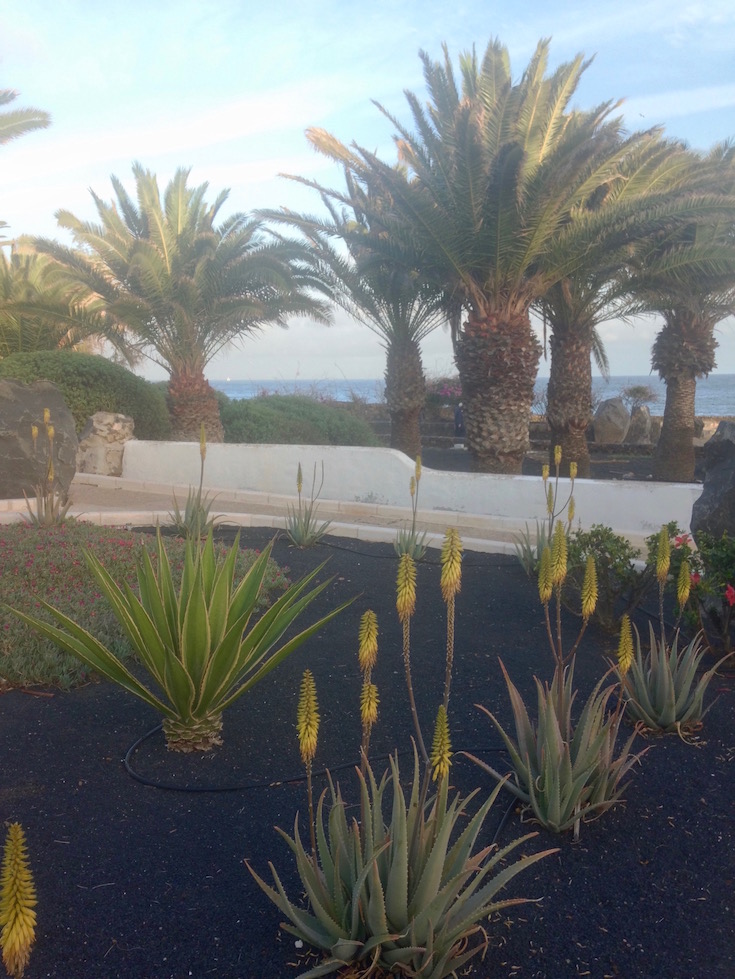 Yyyep, I know the one on the right is a tree. And to people from this part of the world they are as everyday as our mighty sycamores. But if you were living here as an incomer they would certainly be novel for some time. As I mentioned in my last Lanzarote post, the island is teaming with big juicy green and yellow aloe vera plants. Which makes for good business for the Canaries as well as sketchbooks. And look at that luscious black volcanic soil they sprout from!

In an ideal world my perfect day would start with a stroll to my favourite beachside cafe. Where I would enjoy…oooh, maybe two proper coffees before setting off to work. Even IRL (that is, without it being an art holiday) I could handle such an existence.

“Yes I know,” I tell my inner Scot. “You still have to go to work, earn a crust and pay the bills. The sink still needs unblocking and the rubbish doesn’t take itself out.”

But who wouldn’t want their day to start on a more chilled note before sketching or painting? I cycle a lot and would commute by bicycle when I lived in London. Now living in Scotland, I’ve lately ‘discovered’ the Forth-Clyde canal. Needless to say, cycling in London was a daily risk to life and limb. The traffic is horrific and the city is crossed with bright blue cycle lanes to encourage London to get on its collective bike. I don’t doubt this idea was well-intentioned, but several of them are as scary as f*ck! Especially the one in Kennington, south London which leads towards Brixton.

That said, I felt safer cycling on the mean streets of London as opposed to Glasgow (which is saying something).

Anyway, I digress. We hired our bicycles here at Tommy’s Bikes on the Costa Teguise. And set off for an adventure. Which included the experience of being blown by the wind around the headland at Costa Teguise without having to peddle – that was fun! Along the way there’s plenty to stop off and sketch. We cycled from the Costa Teguise towards Arecife, hoping to come across the odd wee fishing village. They do exist but beyond the airport, which was a bit further than we could manage. Partly because after the cycling path ended we found ourselves out on The Open Road. Oooops!

But it turned out to be an interesting detour. We cycled around the industrial estate that’s visible from where we were staying and then found the small bay with the shipwreck. This made Stephen very happy as he loves lines, detail and symmetry. He loves looking at industrial buildings and pipework on a huge scale and puts a lot in his own artwork. A possible subject for another post, me thinks. As I mentioned earlier, the wind is strong enough to blow cyclists along the coast (and wind surfers, of course, which is the whole point of coming here for them!). Take a look at how it weathers the rock and the interesting shapes you could capture.

This arrangement below reminds me of an Andy Goldsworthy natural sculpture. The wind is so strong it means that Lanzarote is never too hot all year round. Seaspray also takes its toll on the iron sculptures we saw along the cycle path near Costa Teguise.

7. SWIMMING IN THE SEA At home I try to go swimming at least twice a week and I’ve joined a great new pool. But nothing beats a dip in the sea. This little bay is “walled-off” from the Atlantic by the spit of boulders in the photo. It’s a brilliant way to set your endorphins racing for a day of art. Not really art-related, but I do love being places where you need to speak another language. It’s amazing to hear about how many British ex-pats stay abroad, without learning much of the language used where they live. For me a huge part of going abroad is speaking the local language. Even if you splutter away at it, it does show you’re making an effort.

The two people in the picture below are Maurizio and Jacqueline, the Italian owners of Cafe Suerte where I had my morning coffee fix in Costa Teguise, so I got to dust off my Italian and Spanish.

What inspired you about a recent visit or holiday? Leave me a comment.